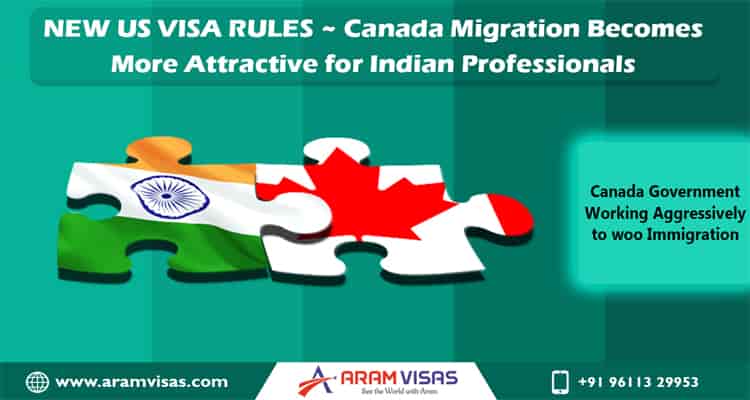 If you notice, majority of the American Technology companies are expanding themselves in Canada since the time Donald Trump had been elected as the president.

The skilled worker visa that was typically issued in America has changed from Apr’19 on wards. The new transformation will definitely hurt the fresh graduates in India seeking for US jobs. The new rules and regulations were announced on January 31 by the trump administration. As a result, additional 5,300 foreigners possessing higher or master’s degree from the U.S. institution are expected to receive the visas now.

As mentioned above, this change will reduce the chances of finding jobs for Indians. The Indian candidates with undergraduate degree will find it difficult to get jobs in America. Besides this, even individuals with advanced degrees from non-US universities will face these difficulties as well.

Trump’s policy is making talented people prefer migrating to Canada instead of USA – As a result, USA companies are moving to Canada

Canada Immigration has become more attractive for the Indian Job seekers. The American based companies such as Apple, Amazon, IBM & Microsoft, along with other American technology companies, have expanded their operations in Canada after the election of Donald Trump.

As per the reports from the Indian engineers, in spite of being hired by American Technology companies, they were denied work visa in America.

Brad Smith, the former President of Microsoft, in 2018, publicly stated that they will be forced to shift their jobs to other provinces outside United States if the visa restriction persists.

The big companies from America are rapidly expanding in Canada so as to hire the top Engineering, Math & Science graduates from all across the world.

The government of Canada has introduced several measures to attract skilled foreigners. These measures make it easy for the students & get work visas.

The Canadian authorities grant express entry PR visa to individuals with advanced skills within 14 days of making the application as well as within 6 months to the skilled workers. While it takes 15 years for an Indian engineer to get the PR Visa.

Did you know? Facebook & Google expanded their offices in Edmonton & Montreal in the year 2017 so as to look for the best talent in the world of official intelligence.

The Canadian government wants to make the country one of the leaders in the world of AI & business and machine learning research.

Hope you loved reading this blog.

Isn’t this a very good opportunity to immigrate to Canada? Approach us to check your eligibility. We are the Best Immigration Consultants in Chennai.